The Wireless GO II is a versatile and ultra-compact dual channel wireless microphone system consisting of a dual channel receiver and two transmitters.

Discover everything you need to know about using your Wireless GO II here. 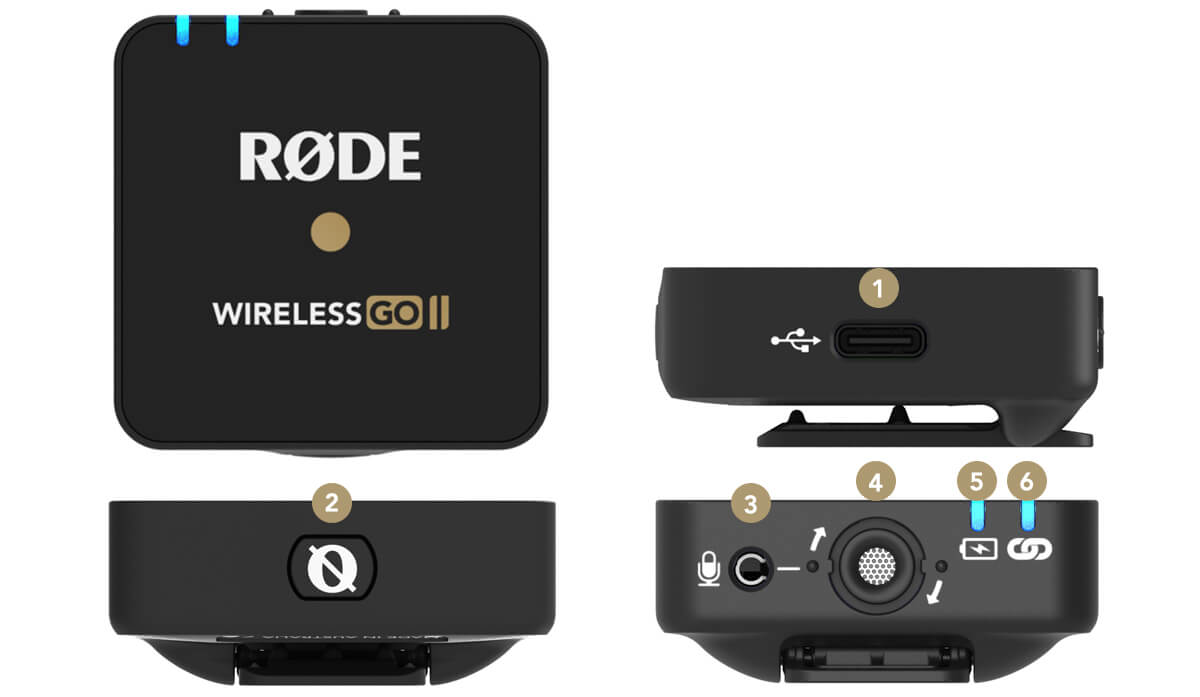 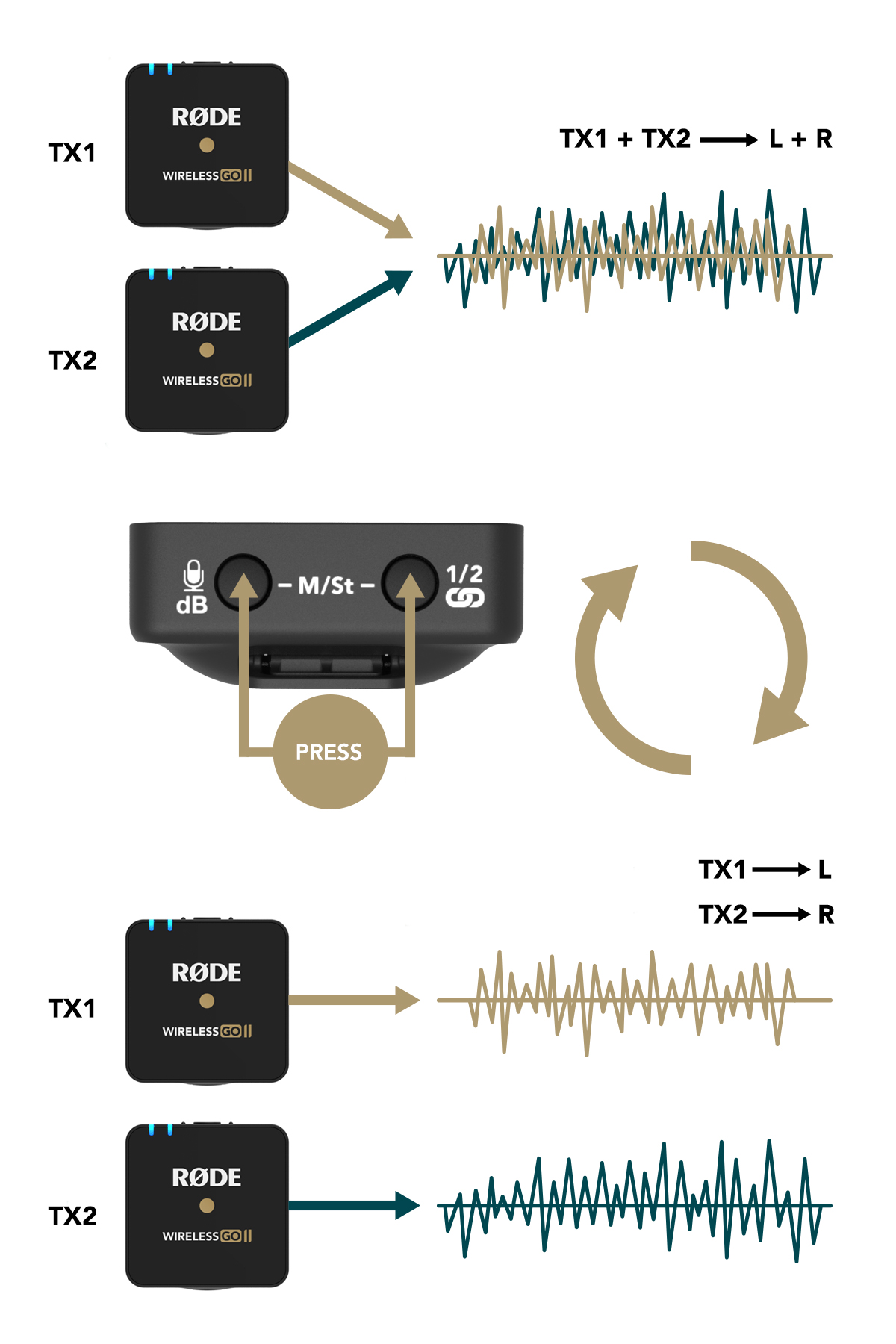 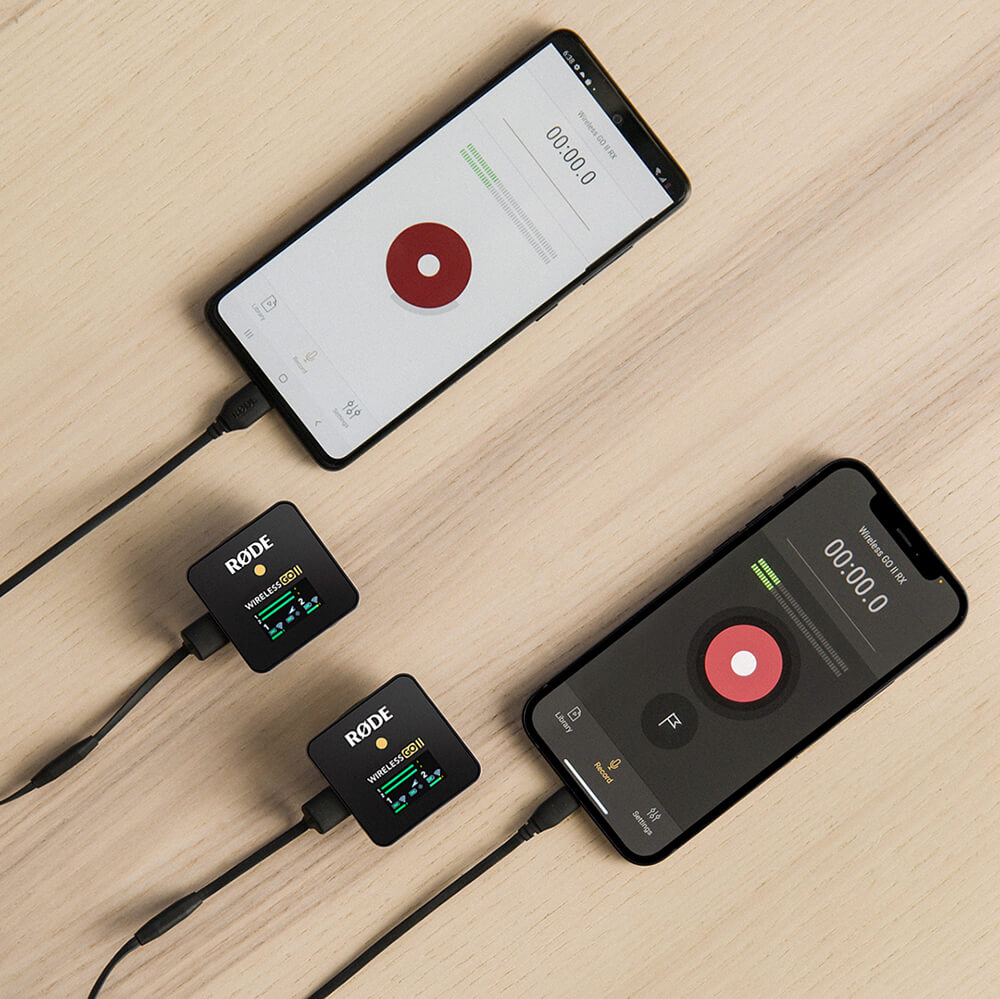 To conserve battery life, you can activate power saver mode on the receiver. When enabled, this will turn the LED backlight off after 10 seconds of inactivity.

The Wireless GO II’s transmitters and receiver each have an in-built lithium-ion battery that can last up to seven hours. When the battery is low on a transmitter, the battery LED will start flashing. When it is very low, it will flash faster.

Each of the Wireless GO II’s transmitters has an on-board recording function, with internal memory capable of storing over 40 hours of compressed audio or seven hours of uncompressed audio. This feature can be activated via RØDE Central. When activated, a red 'REC' recording icon will appear above the channel that the transmitter is connected to on the receiver.

There are three different on-board recording modes to choose from. These can be toggled via RØDE Central:

'Always' recording mode: When this mode is activated, the transmitter will start recording audio as soon as it is switched on. It will continue recording until it is switched off, regardless of whether is it connected to the receiver. This means that you will have a continuous recording from the moment the transmitter is switched on, making this mode suitable for using the Wireless GO II as a standalone field recorder. Note that in this mode, the ‘mute’ function will not affect the on-board recording (although it will still mute the wireless transmission). Also when this is activated, audio can only be recorded in uncompressed format (see below for more info on this).

'Backup' recording mode: When this mode is activated, the transmitter will start recording audio when it connects to the receiver. When the receiver is switched off, the recording will stop. This means that if the signal drops out at any time or if you forget to hit record on your device, you will still have a backup recording for the period that the wireless connection was active.

'Off': Switching off the recording function means the transmitter will not record any audio internally. Existing recordings will remain on the unit until manually deleted using RØDE Central.

To access these recordings, open RØDE Central, plug in your transmitter(s) and select the device. Your recordings will be listed chronologically in the left-hand column from oldest to newest, with the recording time, date and length displayed. Click on a recording to access it.

When using the on-board recording function, RØDE Central gives you the option to configure the format of the audio file. Note that the ‘Always' recording mode will record in the uncompressed file format to ensure you have the highest quality audio available.

Compressed recording: In this mode, the Wireless GO II transmitter records audio in a compressed format. Each transmitter can store over 40 hours of compressed audio. Note this is higher than the 24+ hours stated when the Wireless GO II was launched – our engineers have been able to optimise the storage capability in the latest firmware release compared to the firmware that shipped at launch. This new firmware will be installed when you connect the Wireless GO II to the RØDE Central app. This setting is only available when ‘Backup Recording' mode is selected.

Uncompressed recording: In this mode, the Wireless GO II transmitter unit records in uncompressed WAV format, and currently utilises a 48KHz, 24-bit audio stream. In this mode, the unit can store around seven hours of audio. This is the only mode available when using the ‘Always' recording mode. 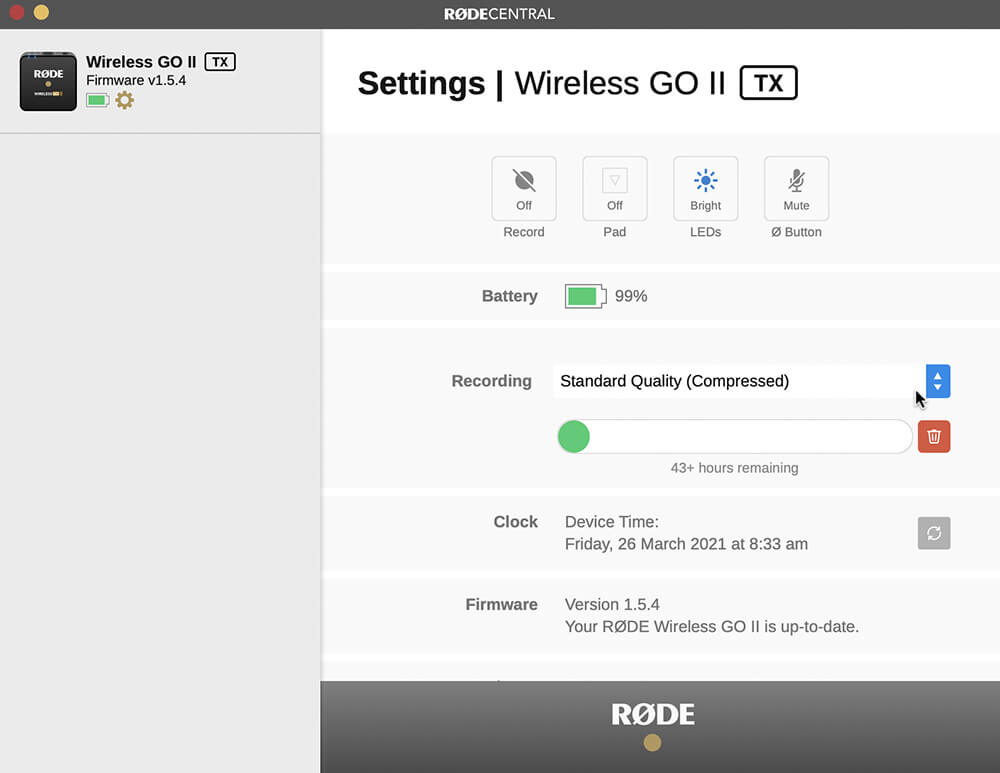 RØDE Central allows you to activate the Wireless GO II’s safety channel. This is a handy feature that is also found on the VideoMic NTG and VideoMic Pro+.

The safety channel can only be activated in 'Merged' recording mode (when the transmitter channels are being combined into a single summed output). These recordings contain two channels of identical audio. However, enabling the safety channel will reduce the volume of one channel by 20dB.

This is a lifesaver in recording situations where your sound source suddenly gets louder and overloads the input of your recording device, causing distortion. This cannot be fixed in post-production and can effectively ruin your recording. Having a second channel recorded at 20dB lower than the main channel – and thus most likely not loud enough to cause distortion – means you will always have a safe backup of your audio.

To find out how to access the safety channel audio, check out this blog post on ‘How To Record Two Microphones Into Your Camera’, as many of the same principles can be applied.

RØDE Central gives you access to an additional fine gain control. Activating this on the Wireless GO II receiver will expand the three-stage pad to a 10-stage pad, going from 0dB to –30dB in 3dB increments. This allows you to precisely tailor your Wireless GO II’s output to your recording device. It also gives you access to an extra 6dB of gain reduction, which is handy if you have a particularly sensitive recording device. 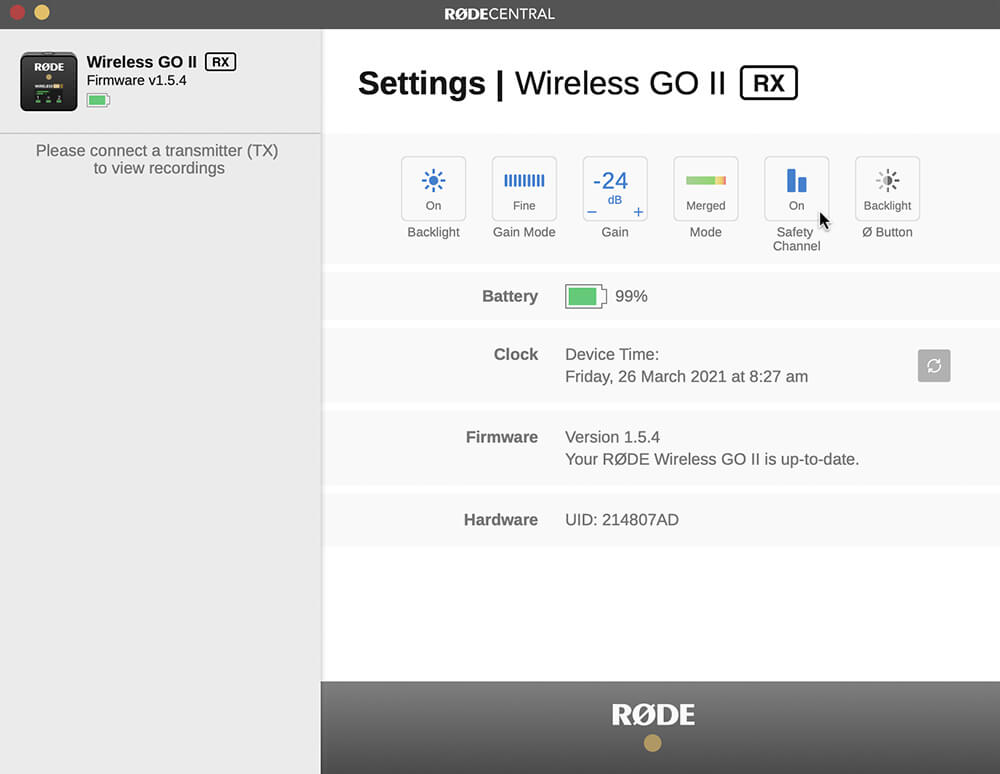 Sometimes it may be necessary to reduce the sensitivity of the Wireless GO II's in-built microphone, so we have included the option to activate a pad for the input of the transmitters.

To activate the pad, simply toggle the 'Pad' button in RØDE Central. You can also activate the pad from the receiver by selecting the transmitter using the pair button (‘∞‘), followed by a long press on the ‘dB’ button. Note: a short press will activate the mute function, so take care to hold the button until the pad symbol appears on the receiver display.

This feature is particularly useful when using the transmitter with the Interview GO handheld adapter, where it may be used very close to the mouth. The pad function also affects the 3.5mm microphone input if you are using an external lavalier.

You can change the function controlled with a short press on the power (‘Ø’) button on the transmitter via RØDE Central. There are three options available: 'Mute', 'Marker', or 'None'.

In ‘Mute’ mode, a short press of the button will mute the microphone, and another short press will unmute it. The mute status is displayed on the receiver screen (note that the mute function has no effect on the on-board recording when in ‘Always' recording mode). In ‘Marker’ mode, a short press on the button will drop a marker into the internal recording, which is useful if you need to locate a specific section of audio in post-production. 'None' mode deactivates the button. 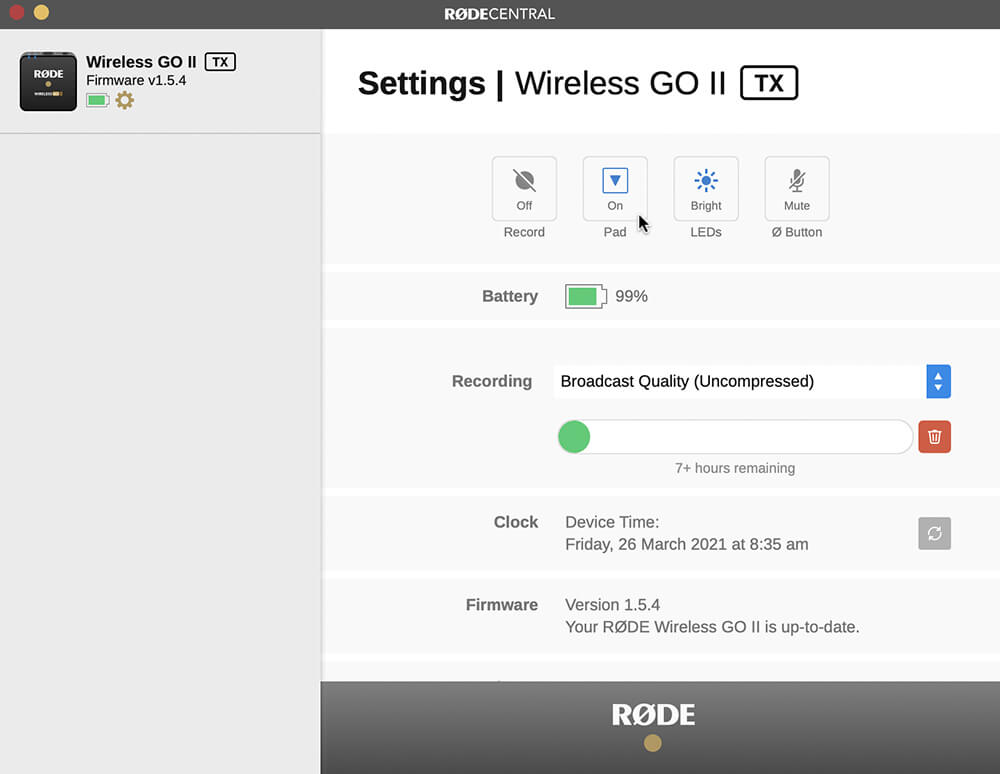 To download your free copy of the software, we require a valid email address. RØDE will only email you regarding the software: bug fixes, software updates etc. If you would like to receive new product information and news from RØDE, click the box below.

Current version is 1.1.3
How we use your email address

The information you provide will be collected by or on behalf of us and may be disclosed to third parties that help us deliver our services (including information technology suppliers, communication suppliers and our business partners) or as required by law.

We may disclose your personal information to third parties outside of Australia who provide services to us, including to service providers in the USA.

Our Privacy Policy is available at www.rode.com/privacypolicy and explains: (i) how we store and use, and how you may access and correct your personal information; (ii) how you can lodge a complaint regarding the handling of your personal information; and (iii) how we will handle any complaint. If you would like any further information about the our privacy policy or practices, please contact us at privacy@rode.com.

By providing your personal information to us, you consent to the collection, use, storage and disclosure of that information as described in the Privacy Policy and this collection notice.